Someone just marked this as a favorite online, so I thought I’d share it with you all. I had completely forgotten about this print from 2004. It’s oil on paper and about 11×14″. I made it by painting a plexiglas sheet, then wetting it with turpentine and sticking it on the paper. Here’s a sketch I made of the interior of a cafe a while back. This is OCF Cafe in Fairmount (Philadelphia). I did it in purple ballpoint pen, but this scan is black and white. It was a challenge to draw the people because they kept moving, or getting up and leaving. Overall the perspective is off, but I still like the atmosphere of the drawing. I recently hung up this large piece, about 3.5 feet by 1.5 feet, which consists of painted small illustration board squares with drawings on mulberry paper glued to them. Then I glued them in a line, joined by string, to a painted black framed wooden board. Quite the complicated mixed-media thing in the end. I’d like to share one of the squares today. It’s only maybe 4 inches by 4 inches. 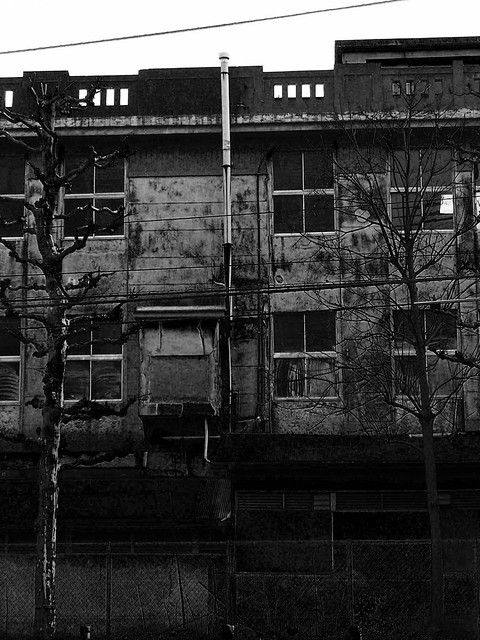 Why is that? I realized there is a fundamental difference between simply taking photos of your environment and going out specifically to gaze at modern ruins somewhere else. There’s a difference between living in Buffalo and taking a ton of photos of decaying sites in and around the city, as several photographers I follow do, and visiting Buffalo simply to take photos of its decay and misfortune. The difference is that one person goes home at the end of the day, sheaf of photos (virtually) in hand, and can gaze at the crumbling beauty of these buildings. The other person is already home, and lives in this place and doesn’t have the option to leave. (Or, they don’t leave. I realize not everyone is trapped in places like Buffalo and Detroit, but my point stands.)

One person has to deal with the reality of what modern ruins mean for a city, and the other can look at it as purely aesthetic, through a tourist gaze. Being a tourist of others’ misfortune is not something I want to do. I remember taking a friend to see 8 Mile Wall in Detroit many years ago and feeling profoundly uncomfortable, almost queasy, about doing it. It wasn’t that I feared for our safety in an iffy Detroit neighborhood. It was going there to take a tourist look at a decaying city and a remnant of segregation, now a black neighborhood on both sides, that’s not marked as a monument or historical site, even though it should be. It’s covered in colorful murals. It’s not a sight that someone should avoid. But it made me question my own motives and my relationship to the site. Why was I really there? Was it just to marvel at decay, or was it actually to reflect on redlining and segregation, the heritage of my Rust Belt upbringing?

I’m sure some people do reflect on this kind of thing, and have motives beyond simply making an aesthetic spectacle of the decay and ruin of American cities that still have people living in them who have to deal with that decay and ruin on a daily basis. Some people call attention to the plight of cities and could use their photography to rally people around fixing the problem; however, most don’t see it as a problem, but rather a kind of romantic idea of modern decay.

This is why I don’t feel as much ambivalence about supporting local Detroit or Buffalo or Philly or wherever photographers and artists who reflect and represent their own environments, the ones they live and deal with and may be working to better even as they are capturing the beauty they find within their dirty exteriors. But I feel a huge amount of ambivalence about “outsiders” doing the same – the ones who go home at night to better environments without stopping to consider the reality of the photos or art they’ve just made.

Perhaps there’s more in the in-between space than I’m assuming. I’m working on a paper about ruins photography in the mid-2000s in Japan and still am wrapping my head around what to make of it all. I’ve found photographers who make a lot of money (well, some amount of money) off their artistic portfolios of the aesthetics of modern ruins; then again, I’ve also found older people’s websites showing photos of their old abandoned elementary schools and recounting their memories. I don’t know that these older people are more or less, or at all, critical of the larger picture of the emptying out of rural Japan. But it’s a different perspective.

I think I’ve written about this before in my blog at mollydesjardin.com, but I was once contacted by someone on Flickr after I took some photos of a giant public housing project on my walk home from a fancy rich school to a slum in Yokohama. There were a lot of in-between spaces between those two spaces. The person said to me, thank you so much for putting these photos online, because I grew up there and now live in New York City and am happy to see how it’s doing. I should have been more hesitant to gawk at this dirty giant housing project that I’d initially thought abandoned, perhaps, but in the end I’m glad I could connect this person to their memories. I suppose it’s all about perspective, and the differing ones that people can have about the same piece of art; at the same time, it’s still not all right to uncritically artistically capitalize on the misfortune of fellow citizens here in the US or anywhere.

This is a mixed-media piece in pastel, charcoal, and ink — with water — inspired by a song I was listening to. By the time I made the piece I had forgotten the lyrics so the title is just an approximation. It turns out I totally got them wrong. It’s about 9×12″.

I thought I’d share this work in progress, since I haven’t done anything in colored pencil in years. I started with the figure on the left and worked very tightly, but as you can see, I returned more to my “own” style with the face on the right. In the end I’m happier with the right-hand side. I hope to finish this up with colored pencil, ink, and watercolor.

This is a fairly large piece (like 14″x17″) and I haven’t taken a proper photo of it, so here’s a screenshot of the Instagram pic I posted. Jeez. Can I get my act together?

The piece is in conte crayon, graphite, and brush pen; it is copied from a photo in a catalog, where I get most of my art references from, much to some people’s amusement. This didn’t come out exactly as I’d hoped, but the guy certainly looks even more brooding in my drawing than he did for H&M, even if his face is a little lopsided. A quick practice, overall.

This started out looking like someone I know, so I decided to start throwing in elements of other people I know as well. I did this thematically and not just visually, so that explains (right.) the bones.

I had fun making this. There’s a lot written about the meaning and pleasure of “mark-making” which can be hard to get used to — it means you’re not interested in the product, just with the act of making. It’s harder than you think to separate yourself from the “quality” or beauty of your end-product and just live in the process.

I don’t know why this tough guy is wearing a sweater. But I like how the drawing turned out. Just a marker sketch in a coffee shop.

This is the “latest” (many years old) out of a series of 50 faces I was trying to make. Perhaps I’ll explain it fully one day, but although it’s rather morbid, it has a lot of personal meaning for me. My goal was 50 but I only got to 8. I made many of these when I last lived in Japan, in the northern part of Tokyo. Here’s one of my favorites that despite trying to make look dead, looks frighteningly alive.